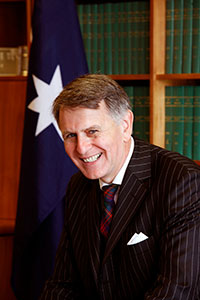 Justice Logan was appointed to the Defence Force Discipline Appeal Tribunal as a Member on 1 September 2011. He has been a judge of the Federal Court of Australia since 2007.

His Honour graduated from the University of Queensland with a Bachelor of Economics and a Bachelor of Laws. He was admitted to the Queensland Bar in 1980. He was then working in the Commonwealth Crown Solicitor's office in Brisbane. At the time of his resignation in July 1984 to commence private practice at the Queensland Bar he was acting as Principal Legal Officer in charge of the Prosecutions Section of that office. He was appointed Senior Counsel in 1999.

Justice Logan enlisted in the Australian Army in 1975 as an officer cadet. He was commissioned into the Australian Intelligence Corps in the Army Reserve in 1976, following graduation from an Officer Cadet Training Unit. Thereafter, he held a variety of regimental, non-regimental and staff appointments in that Corps in the Active Army Reserve including 2IC and Officer Administering Command, 1st Intelligence Unit (Field Force), SO3 (Int), HQ 1 Div and SO2 (Int), HQ 7 Bde. He transferred to the Standby Reserve in the rank of Major in that Corps in 1993. That same year, he was awarded the Reserve Force Decoration (RFD) in respect of his service as an officer in the Army Reserve.